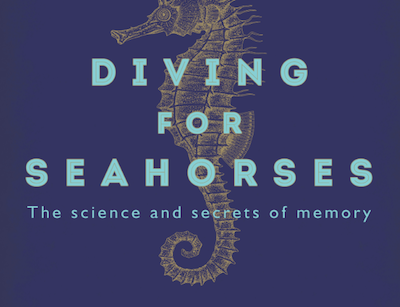 In their new book about the science and secrets of memory, Diving for Seahorses, Norwegian sisters Ostby & Ostby claim that the mechanism fuelling our imaginations is identical with that used for reconstructing memories.

“…as far as our brains are concerned, the past and future are almost the same”.

I’ve often thought my memory was pretty poor, yet on the other hand, I have a very vivid imagination -so I was rather intrigued! Imagination is crucial in video production since we have to imagine a visual flow which will illustrate stories about people and life in a B2B marketing context. I’ll talk about an example in just a moment.

The hippocampus, they explain, shaped like a little seahorse, is a kind of memory CPU, responsible for reconstruction and integration of memories in all five senses- sight, sound, smell, taste and touch. It is the cradle for memory formation and connects with the broader network of memory structures and storage throughout the brain.

They detail a number of cases of brain injury, disease and post-surgery deficits which shed light on how the brain acquires, processes and stores memories. It reminded me of the late Oliver Sacks’ many fascinating books on how the brain works, such as his astounding work “The man who mistook his wife for a hat”.

As Sacks does, they zero in on synaesthesia as one mechanism that can greatly enhance memory, through a visceral mixing of the senses. They also conduct several memory/ imagination experiments featuring scuba divers and skydivers, artists and amnesiacs.  I could relate to them all in one way or another!  Pleasingly for me, they cite well known scientific evidence supporting the theory that people learn and remember more effectively through words and pictures than through words alone.

But it is their point about imagination that I wish to reflect on here. As mentioned I’ve often considered my memory to be sorely lacking so I’m always writing things down, my calendar is usually up-to-date, I’m constantly taking photos of all the best moments of life and love to share them as a kind of document of our fleeting and unlikely existence.  Here I am trying to remember what I’m meant to be doing. 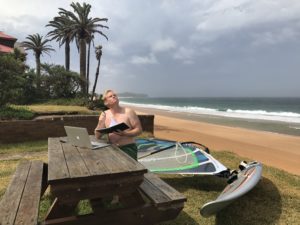 Yet I find imagining future scenes & scenarios almost effortless. I only have to focus on a particular message or concept and then a stream of visuals comes flooding in, one after another in an eclectic waterfall of random or ridiculous, sometimes deliberate and logical scenes or ideas, vivid in detail. These will often form the basis for creating a shot-list based on a script I’ve written in collaboration with a client.

Semantic memory, according to Ostby and Ostby, is the type of memory that is purely narrative – just words in a language.  For example, “ I went to school in Sydney”.  But Episodic memory is the visual scene, apart from any language about it, using a different part of the brain entirely.   It’s the part that allows you to picture a pink elephant with a blue spot on its side, in your mind’s eye.

It is exactly this leap from semantic to episodic memory and back again – or the process of future episodic thinking (imagination) – which takes me from a draft script to developing a story with supporting visuals that will grab and hold an audiences’ attention.   This is the secret to delivering key messages in the form of a story with an emotional payoff for the viewer. 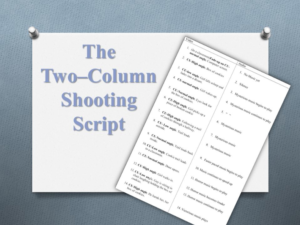 When it comes to filming, there is always a thrilling jump from a once imagined scene to its concrete form once shot. While the seeds of the idea are embedded in the images, the practical execution often offers something more or some variation I could never have foreseen. It is at this point that the director of photography comes to the fore, interpreting key aspects of the story and crafting scenes like a painter with a brush.

After shooting, it is the collision and merging of these two elements- imagination and execution- that sets the scene for the dynamic integration of (semantic) storytelling with (episodic) pictures and music during the editing phase. It is here that I enter a “state of flow” sometimes for days, sometimes for weeks in a stretch, connecting the dots and composing and juxtaposing an “information experience”. 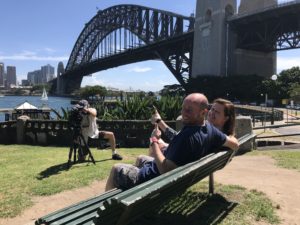 I had the pleasure of being in such flow through December and into early January 2019. Matt Ball and Fiona McEwan at Buildcorp asked me to create a video about their major remedial building project in Kirribilli, “Uplifting Bridgeview”,  which resolved a number of serious problems owners and residents had endured for many years.  The building of 47 units in 3 towers had a first class view of Sydney but suffered from flooding, a lack of insulation, recurring damage and a less than inspiring aesthetic.  The architects faced the challenge of envisaging and designing a new structure built on the “existing bones” which would solve these problems and give the building a “second life for decades to come”. 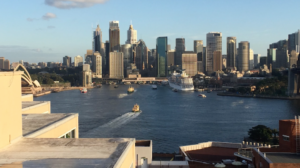 At first blush, it was easy to imagine aerial shots of the shiny new façade with its spectacular harbour views, compared with dull “before” shots of the building. However,  the real heart of the story appeared as we explored the key characters, their environment, aims, struggles and lifestyle aspirations. Utilising the principles of McKee’s ‘Storynomics”, we integrated their story within Buildcorp’s, showing how the company has delivered a platform for the “quintessential Sydney” lifestyle, unveiling the new Bridgeview like a phoenix rising from the ashes.

After weeks of work, the end product is, in some ways, as much a delightful surprise to me as to my clients, despite our myriad imaginings and the many decisions that went into bringing it to life. It is my hope that these kinds of stories will soar above and beyond traditional product marketing in a seamless and valuable experience for anyone contemplating such a building project.

Rather than giving away the story here, I invite you to come into Adam and Kasey‘s world, in a 12-minute piece about a lad from Newcastle who wanted a career in IT and his adventurous American wife who writes about unique Australian travel, food and wine experiences. 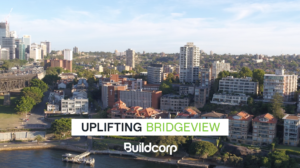 Before you watch it, one last note about the book if I may.  After reading Diving for Seahorses, I decided to play around with my wobbly memory by simply paying sufficient attention to some distant, fuzzy childhood wisps and memory fragments. They were just dancing on the tip of the tongue but not quite reachable. Yet I found that with a little effort and patience I could kick my hippocampus into action, reconstructing long forgotten scenes and experiences. Suddenly I was five years old zooming down a huge hill on an orange plastic trike, my earliest initiation into the world of adrenaline sports.  The thrill of the monkey bars in our prep school playground emerged and lead to the classroom, hot meat pies at lunch in winter and being angrily sent to the corner, each image leading to the next as though through a 3D video game.  Anyone can do it….we simply must make more time for it!

Many thanks to my aunty Celia Tilbury for this fascinating summer read and to Dom Flanagan (DOP), Simon Mapstone (Remote Pilot A), David Morgan (Remote Pilot B & Gimbal Ops), Andy Grant (Colour Grading) &  Laki Fotopoulos (Audio Post) for weaving their magic.  Special thanks to Fiona, Pete & Matt at Buildcorp and to Brent at BTB Architecture Studio for trusting us to help them take the leap into this new marketing territory. Lastly, we are all very grateful to Adam Murray and Kasey Clark for allowing us into their lives to tell their story.

Hope you enjoy the tale!