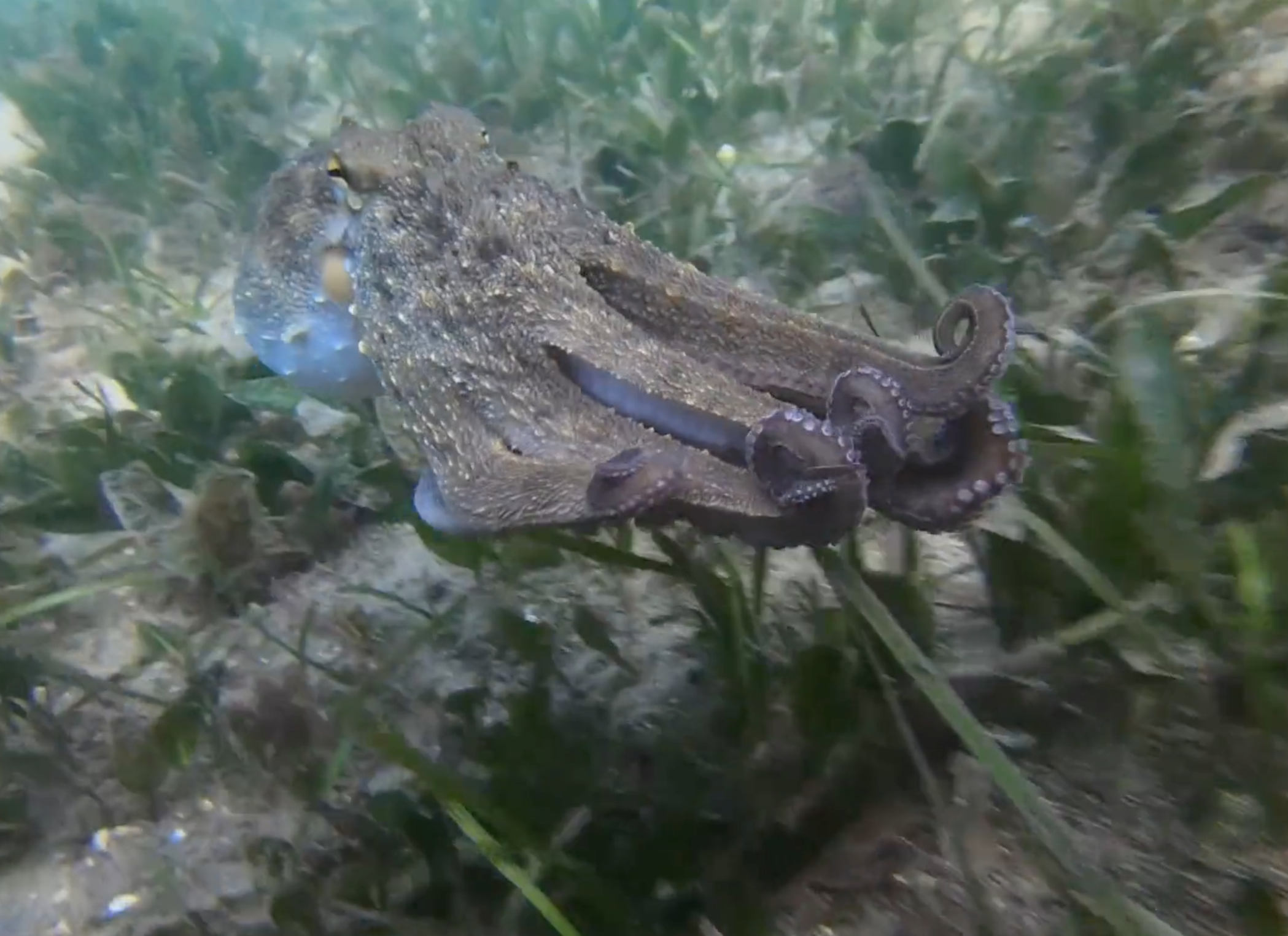 Marine life has fascinated has me since I was a kid. Nowadays I spend a lot of time scuba-diving with my soul-mate Janey. We have shared many mesmerising adventures under the waves, sometimes in challenging conditions and other times in more of a hypnotic, meditative state. The depths of winter provide some of the clearest visibility throughout the year and we love to rug up and explore Sydney’s underwater world as often as we can, marvelling at cuttlefish and octopi, sharks and rays and a multitude of fish, eels, seahorses and more. It’s always an incredible thrill and one never knows what’s going to happen next. 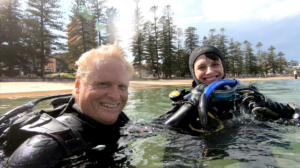 Recently, many friends and colleagues told me about a great new film “My Octopus Teacher”, so we jumped onto Netflix one evening. Being a documentary fan, I’m always keen to learn more about the weird and wonderful creatures that inhabit the sea. My scientific orientation helps me to understand marine biology, behaviour and evolutionary processes. David Attenborough is my hero.

I have to say at the outset, it’s a wonderful film and I highly recommend it. I wish I could produce something as stunning and powerful. But that wasn’t my initial reaction. In fact, it really annoyed me! I had to stop watching halfway. That was weird for a film about something so cool which is obviously made by professionals.

The film opens up with an intriguing storyline, stunning cinematography and is beautifully edited, with powerful sound design, but I soon started to doubt the story’s authenticity. By 45 minutes in I was getting really irritated. Shortly after I “walked out” in disappointment.

As a B2B video producer, director and editor I immediately recognised the principles of a well-told story, with rich imagery, great music and superb editing, but felt that I was being lied to. What a total hoodwink, I thought. I could see straight through it.

When friends told me how much they loved the film they were surprised by my reaction, as I was with theirs. I told them I didn’t buy the personal relationship between the protagonist and the octopus and that it was concocted and fake, all in the name of “a good story“ and probably advertising dollars.

I went on- “Octopi, like sharks, evolved hundreds of millions of years before humans ever walked the earth and wouldn’t even know what humans are let alone have a personal relationship with one. Anybody with any interest in the subject knows they are intelligent, lose their arms in battle (thankfully they grow back) and sadly, octopi die when they give birth. Hey, there were probably 20 different octopi in the film and who knows whether they were male or female. Most divers know that an octopus will reach out and grab your finger within two minutes of meeting it. Especially if you have food in your hand. It’s an anthropomorphic fantasy, a fairy-tale dressed up in drama!”, I insisted.

Yet more friends told me they loved the film. The ratings are high. Thinking I was the wiser, and that I knew why it had such power, how it had been so carefully written, shot and edited, I still wondered if I was missing something.

Authenticity in storytelling is everything to me and so the critical, analytical part of mind had gone into overdrive, particularly in light of our deepening understanding of the negative effects of social media and the business model of monetising our emotional & social reactions. I have become deeply sceptical of the whole online advertising model and strive to create video content with stories which have the authenticity and emotional power needed to persuade a business audience of a client’s value proposition. As Screen writing guru Robert McKee claims, there is more power when you “write the truth”.

Perhaps my initial scepticism can also be understood in light of the recent film “The Social Dilemma” which exposes the emotional manipulation in the new “attention economy“, where advertisers pay “platforms” whose “free” model enables algorithms to crunch user’s data and optimise advertising not for human well-being but for endless “engagement“, whether it be outrage, shock, horror or any other powerful emotion. Anything to keep you scrolling! The outrage machine has been weaponised in politics through mis-information, identity politics, tribalism and is leading to a shattering of any coherent shared reality. The result, according to Tristan Harris and Sam Harris is a resurgence of cultish, religious conceptions of the world. How sad that the information revolution could be leading us back to the dark ages.

Now, witness the rise of Deep Fakes and “Synthetic Media”, which could threaten the whole possibility of authentic video storytelling in it’s entirety. According to author, Nina Schick, It’s already happened with still images and we are headed into a world where nobody will be able to tell what is real and what is fake in video anymore. Fake content will actually be indistinguishable, and at such massive volume, unstoppable. She calls it the “Infocalypse” (or Information Apocalypse), where a complete epistemological breakdown is one likely outcome.

My hope is that authenticity will be able to be verified and become even more valuable in this new, dizzying media landscape, and that it will be even more of a must for business communications. I’m glad to see new technology being developed to combat disinformation, such as Adobe’s Authentic Content Initiative and Microsoft’s Video Authenticator.

During a recent physiotherapy session the topic of My Octopus Teacher came up yet again. What did I think of it? Are Octopi really so inventive and intelligent? Was it true they could ride on a sharks back? Can you really go diving at night? She loved the narrator’s gentle voice and was spellbound by his story.

It had really piqued her interest and that has to be a good thing! So I decided to go back and watch it a second time, right through, with as open a mind as possible and with a fresh set of eyes, hoping to find some truth or hidden value.

So I tuned in again, this time without expectations. Perhaps that was my initial mistake –expectations are so often the reason we react this way or that. I tried to park my “production” perspective and just role with the flow.  And I have to admit – it’s a really beautiful, enlightening story and my mind was changed. I realised it’s really only pitched as one man’s personal experience, as one Craig Foster’s interpretation and speculation about what the experience meant for him, without any real scientific claims. Putting aside silly postmodernist perspectives, I have to say I found it an emotionally fulfilling experience and can see the power it has to educate people about the value of marine life and why it should be understood, valued and protected.

In the second half of the film I learned many things about the octopus’s offensive and defensive strategies, I marvelled at the camera work and admired the central protagonist for his renewed vigour for life. Searching online I discovered that Octopi even seem to be in control of their own evolution, editing their own RNA. What?! Perhaps there is something weird going on, and every biologist wants to get to the bottom of it, but according to Richard Dawkins in a recent talk about evolution, natural selection does not require “agency” and he gives a great summary of the whole amazing process of embryology here (33.55-38.55).

In the end, My Octopus Teacher is really more a story about Foster’s thoughts & feelings and how he coped with life’s challenges by engaging with the natural world, than it was about our eight-armed alien friends. He realised that we humans are an integral, connected part of nature, not reified, separate observers, and that we need to do more to protect our environment.

Had I discovered the film’s truth, even if I was a little late to the party? Wasn’t it staring me in the face all along?

This review in New Scientist sums it up well – “…a compelling documentary that may move you despite yourself”.

Perhaps the writers took some poetic license, weaving a grand, fanciful tale to delight the world. And maybe the ends justify the means. But it’s certainly worth the watch. I can say without doubt that this film exemplifies the power of storytelling to move people in ways that will benefit humanity though a better understanding of our marvellous natural world.

You can watch My Octopus Teacher here:
https://www.netflix.com/au/title/81045007

And just in case you haven’t seen it, David Attenborough’s new film is brilliant, if openly melancholy and sobering.

What do you think? Fancy a dive? Cuttlefish are very cool too 🙂