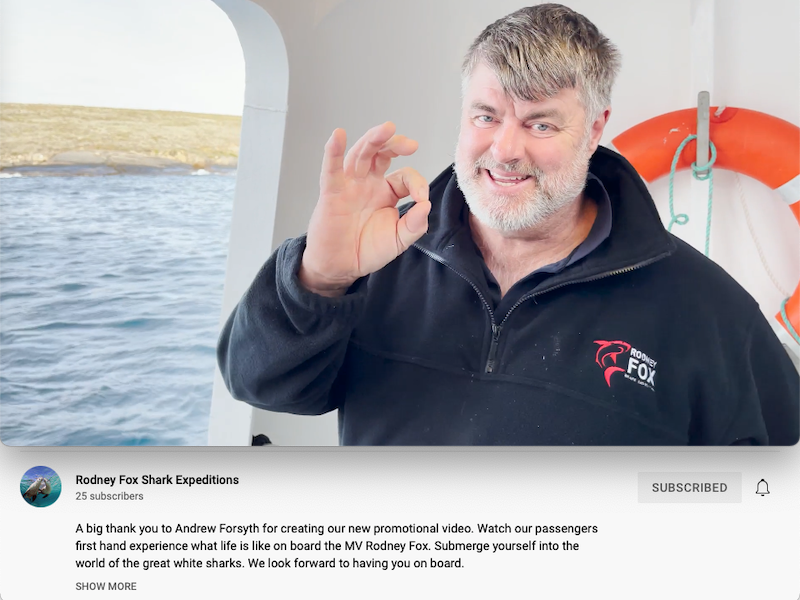 Andrew Fox is recognised internationally as a leading authority on Great White Sharks.  He has spent over 40 years introducing filmmakers, photographers, researchers and tourists to what is surely one of the world’s greatest adventures.

In May 2021, I was lucky enough film the sharks from the safety of his unique ocean-floor cage and produced a new promotional video for Rodney Fox Shark Expeditions’s new website.  I hope the film gives you an idea of what it’s like to see these magnificent creatures up close and to experience the excitement, fascination & cameraderie we felt with Andrew, his excellent crew and a fun bunch of enthusiastic scuba divers. (1 min version: https://www.youtube.com/watch?v=AUbeYRH3gHI)

With a life spent at sea leading many filming and research expeditions, Andrew grew up working closely with many Great White Shark scientists and conservationists. He has co-authored many significant publications in fields as diverse as Great White Shark population biology, behaviour and shark attack mitigation technology.

He has worked on over 100 film documentaries including productions for Disney, National Geographic, BBC, Universal Studios, and the Discovery Channel. Recognised globally as a leading authority on Great White Sharks, he’s often approached by media to give his opinion on environmental issues, shark attacks and shark culling. His balanced point-of-view is highly respected in Australia and overseas.

The Explorers Club Evening of Adventure